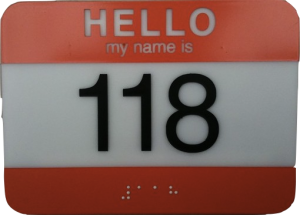 The 4th in series of blog posts in which I describe TDD katas & exercises that I’ve used for training purposes.

Soundex is a known algorithm for encoding last names into a 4-character string. The goal is to encode similar-sounding names to the same representation, so that searches with slightly misspelled names will still find appropriate matches. Langer, Langre, Langr, and Lungrub, for example, all end up encoded in Soundex as L526.

The rules for Soundex encoding come straight from Wikipedia:

Three of the rules (the first, second, and fourth) are straightforward and likely represent the first set of rules tackled. A first positive test could be as simple as ensuring that ‘A’ encodes to ‘A000’.

I take no credit for the third rule–I copied that glorious real-world prose verbatim from Wikipedia. Good luck with understanding it: I’ve run through the exercise several times, and each time I still am a little uncertain about just what it’s saying.

As a result of its good potential for confusion (the implementation can get just a little tricky too), I decided to abandon Soundex for use as a day-one TDD exercise. I’d rather students focus on things that don’t distract much from the TDD learning due to their complexity.

I do think Soundex remains a nice kata that demands a decent amount of “real” thinking.

The exercise is closed, in that the set of four rules above represent the complete functionality for the Soundex algorithm. There are no (non-contrived) ways to extend the exercise. However, there are variants to Soundex, including something known as Metaphone. One simple variant, “Reverse Soundex,” involves prefixing the last letter of the name rather than the first. For purposes of a slightly more interesting exercise, then, you could introduce a new requirement to allow for changing the algorithm based on some configuration value.

I used the Soundex exercise for a number of training sessions. For the book Modern C++ With Test-Driven Development, I used Soundex as the introductory lesson for teaching the fundamentals of test-driven development. I also later included a chapter that demonstrated use of the transformation priority premise as applied to the derivation of Soundex.

** For pairing TDD novices. Impacts to duration can include: