The 3rd in series of blog posts in which I describe TDD katas & exercises that I’ve used for training purposes. 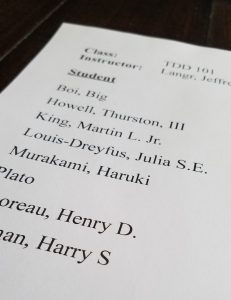 This is one of those exercises that you could probably keep busy with for a full morning if you really wanted–there are plenty more interesting rules about names throughout the world.

This has become my go-to first TDD exercise; I have students do it using “TDD paint by numbers,” i.e. they are provided with the tests already written (then uncomment and implement them, one-by-one). TDD paint-by-numbers allows you to launch very quickly into the first exercise, with minimal need for up-front discussion or explanation. Particularly, you can avoid any discussion about the testing or assertion framework.

Often I will show students a horrible implementation of the name normalizer before discussing their exercise, then ask them what sorts of problems it exhibits. I ask how safe they would feel if they had to add a new feature.

Recently I have been starting this exercise with support for the first ~3 tests already coded. First, this allows me to set the stage for what I hope their code looks like (highly declarative). Second, since they aren’t coding the first test, I can defer the typical angst about providing a hard-coded first implementation. (That discussion comes up and is addressed in a second exercise.) Third, it suggests that TDD isn’t just for “from-scratch” things. Fourth, it allows me to reiterate the point about the safety of making incremental additions to existing code with good tests.

Additional behaviors for which students may want tests (depending on their implementation or confidence level) can include appending suffixes to mononyms or stripping spaces from mononyms.

If I’ve shown students the horrible implementation first, talked a bit about declarative coding or programming by intention, and then stayed atop of them as they do their exercises, it’s possible they will produce reasonably refactored code for this exercise. (But you know how people are…)

Without these caveats, the solutions are generally a big mess. I’ve sometimes gone the route of letting them produce a mess, then re-running the exercise as a demo or in a mob, in which case I press the issue about appropriate refactoring.

My GitHub page contains a repository for Name Normalizer, in which you can find some starter tests in various programming languages. Others have already contributed; please feel free to do so. If you poke around at the branches, you will find some sample solutions as well (not all languages come with solutions–feel free, too, to provide one).

** For pairing TDD novices. Impacts to duration can include: